Old Homestead outside of Spangle 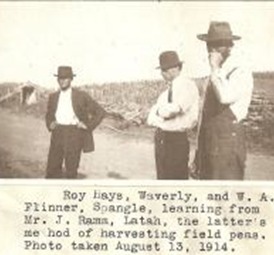 This photograph of Spangle, Washington, was taken 31 years after the Spangles pulled their wagons into

Pine Grove and 16 years after statehood was granted to WashingtonTerritory. The unknown photographer

shot this photo looking out of a second story window in the Spangle School, built 13 years before. (from p. 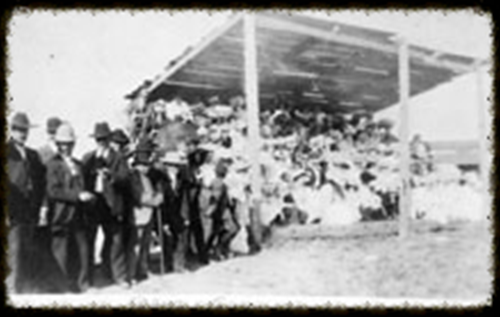 The Standard of Pioneer Prosperity

The lady is Emma Catherine Mill, standing with two of her grandsons, her daughter Ella's boy Johnny Bauer (whom Emma raised after her daughter died giving birth to Johnny), and the curly-headed boy is Albert Babb, son of Emma's only other daughter Mary Babb. 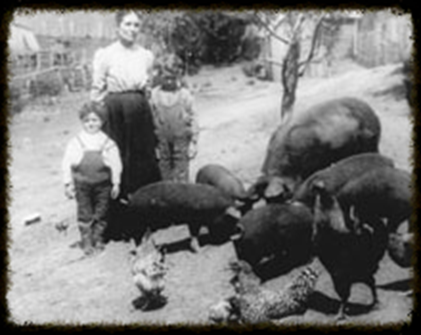 SPANGLE, GATEWAY TO THE PALOUSE, 1888

Photograph of Spangle's Main Street. Spangle's official birthday is Thursday, December 13, 1888. On the eve of statehood (November 1898), new laws were being drawn up to replace the Territorial ordinances. In the fifth ordinance, a street commissioner was to be appointed and paid for his responsibilities, one of which was "to build, set and place solid lamp posts...nine feet high above the ground of the street."

These street lights were to made of "a suitable box to place a coal oil lamp in on posts." The street illumination was one of the first five ordinances to be passed by the city council and was passed on December 17, 1888. (from Nona Hengen's book "Gateway to the Palouse" pages 255-258).

The Christian Church appears in the upper left, minus its steeple. That steeple, which was on the agendum of every woodpecker passing through town, became rickety and was removed sometime around 1924. That

would date this picture of flood waters at around the mid to late 20s, or possibly in the 1930s, during the Depression years. Spangle suffered several punishing floods among those merely considered nuisance "high

water." This obviously was one of them. 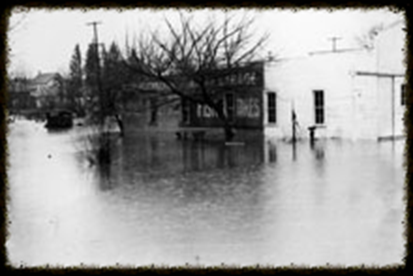 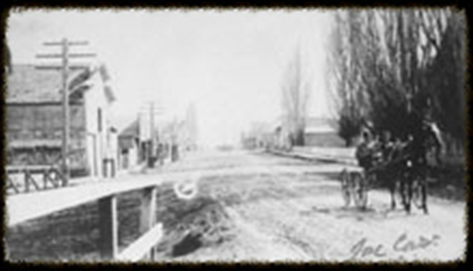 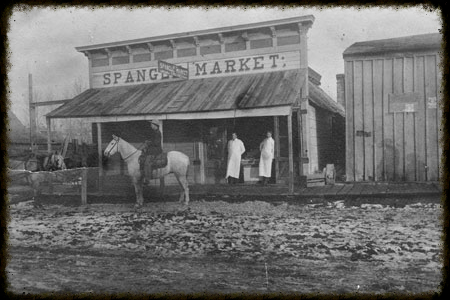 Spangle is one of the earliest communities to be incorporated in the South east corner of Spokane county. The town was incorporated in 1878 . It was in the previous fall that the Honorable Thomas Bents, territorial delegate to Congress, recommended that the name “Pine Grove” be dropped in favor of Spangle to honor William Spangle for tirelessly promoting the growth of a business district.

Spangle got it’s name from a family that moved and homesteaded there after the civil war. William, George and Henry Spangle , all veterans of the Civil war came from Illinois with their families via a route taking them by Rail to San Francisco, by ship to Portland, Narrow gauge Rail from Portland to The Dalles, from there by steamer to Wallula. And then by wagon to Walla Walla,, Then the jumping off place for settlers bent on claiming homesteads, offered them in the unsettled area of Eastern Washington for service to their

country during the civil war.

The Town of Spangle and the Spangle cemetery are among the very oldest in eastern Washington. William Spangle and his wife Christina deeded a part

of their homestead to the town of Spangle. It is recorded.” William Spangle

and  Christina E Spangle of Spokane County, Washington territory have laid off the lands platted on this map as a town site.” This was the year the Northern Pacific sent a branch line through Spangle. William Spangle had already donated lots for a depot and right of way for the NP and Palouse Land company to bring rails through the town.

Folklore tells us that Christina Spangle saying as she signed the land transfer that “it was such a pity ruin such a good ranch for such a poor town”. Spangle is uniquely Located on the timbered northern edge of the Palouse Country. Hence the gateway to a treeless hilly region unique in the world because of an unusual dune like topography composed of silt called loess.